I Was Just Thinking About – CUSTOMS.

One of the things in the Holy Scriptures that cause God’s indignation is the various customs of the people. This is especially true when people begin to make substitutes for Him. One of the Biblical references that express this is Jeremiah 10:2-5, "This is what the Lord says: Do not learn the ways of the nations or be terrified by signs in the heavens, though the nations are terrified by them. For the practices of the peoples are worthless; they cut a tree out of the forest, and a craftsman shapes it with his chisel. They adorn it with silver and gold; they fasten it with hammer and nails so it will not totter. Like a scarecrow in a cucumber field, their idols cannot speak; they must be carried because they cannot walk. Do not fear them; they can do no harm nor can they do any good.”

As a boy, I grew up in a neighborhood where the people were mostly from Europe and very steeped in their religion. The Church would have Feast Days and parade through the streets carrying their statues, saints and idols. People would come out of the tenements and kneel, or make the sign of the cross, and give money to the statue of their choice. Their money was clipped to a sash that was draped over the statue. These people would utter their prayers while holding their beads (Rosary) as the parade passed by – all of this in attempt to seek favor from “God” and answers for special requests. The people were doing this with reverence and sincerity – BUT – they were sincerely wrong. Why were they wrong? What crucial facts were being missed?

First, the first two commandments, Exodus 20:3-5, “You shall have no other gods before me. You shall not make for yourself an image in the form of anything in heaven above or on the earth beneath or in the waters below.  You shall not bow down to them or worship them.”

Second, I Timothy 2:1,5-6, “I urge, then, first of all, that petitions, prayers, intercession and thanksgiving be made for all people…For there is one God and one mediator between God and mankind, the man Christ Jesus, who gave himself as a ransom for all people.”

Third, Hebrews 7:23-27, “There have been many priests, since death prevented them from continuing in office; but because Jesus lives forever, he has a permanent priesthood…He always lives to intercede for them. Such a high priest truly meets our need—one who is holy, blameless, pure, set apart from sinners, exalted above the heavens. Unlike the other high priests, he does not need to offer sacrifices day after day, first for his own sins, and then for the sins of the people. He sacrificed for their sins once for all when he offered himself.” We are to come to Jesus directly. He is The One seated at the right hand of God.

Prayerfully – consider these things with me.
Posted by A Pilgrim's Perspective at 3:49 AM No comments:

Email ThisBlogThis!Share to TwitterShare to FacebookShare to Pinterest
Labels: Jesus Christ Ever Lives To Make Direct Intercession For His Own Who Call Upon Him

I Was Just Thinking About – WRONG WAY CORRIGAN.

Douglas Corrigan was among the mechanics who had worked on Lindbergh’s Spirit of St. Louis aircraft in 1927.  In 1938, he bought a 1929 Curtiss Robin aircraft off a trash heap, rebuilt it, and modified it for long-distance flight. In July 1938, Corrigan piloted the single-engine plane nonstop from California to New York. His goal was to attempt a trans-Atlantic flight. Aviation authorities deemed it a suicide flight. Instead, they would allow Corrigan to fly back to the West Coast, and on July 17 he took off from Floyd Bennett field, ostentatiously pointed west. However, a few minutes later, he made a 180-degree turn and vanished into a cloudbank to the puzzlement of a few onlookers. Twenty-eight hours later, Corrigan landed his plane in Dublin, Ireland, stepped out of his plane, and exclaimed, “Just got in from New York. Where am I?” He claimed that he lost his direction in the clouds and that his compass had malfunctioned. His “wrong way” was deliberate.

However, a person can be in a place where they are unexpectedly lost. This occurred one dark and misty night as my wife and I travelled on a road we had used before. At a crucial point where we needed to turn left, on-coming cars, with their upper beams on, prevented us from seeing a crucial turn we needed to make. As we travelled on, it soon became apparent we were on a wrong road. The paved road was now dirt and gravel. The road was becoming more and more narrow with deep ditches on either side of the road. We stopped and decided we needed to get turned around and try to locate the road we needed to be on. It occurred to us that it is much easier to try to proceed on the wrong road than it is to get turned around and be on the correct one. Very carefully, we started to back down the narrow road with deep ditches on either side. Only our backup lights granted us any indication of how the slow progress was going. We finally got to a place where we could maneuver the vehicle and get it turned around. With a sigh of relief and gratitude, we did so.

Some Scripture has come to mind since that experience. Proverbs 14:12, “There is a way that appears to be right, but in the end, it leads to death.” Also, Jesus stated forthrightly, Luke 13:3, (NIV) “But unless you repent, you too will all perish.” (AMP) “Unless you repent [change your old way of thinking, turn from your sinful ways and live changed lives], you will all likewise perish.” In other words, if one hopes to enter God’s heaven, he or she must get turned around and head in the direction of God alone. Psalm 1:1 states what is necessary and required: “Blessed is the one who does not walk in step with the wicked or stand in the way that sinners take or sit in the company of mockers.” This is God’s right and only way to please Him and to be on the right path rather than the wrong way.

Prayerfully – consider these things with me.

Posted by A Pilgrim's Perspective at 4:15 AM No comments: 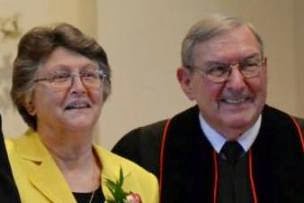